Every year, during the week between Christmas and New Years, I make a pilgrimage to watch eagles stop for a winter feeding along northern Idaho. 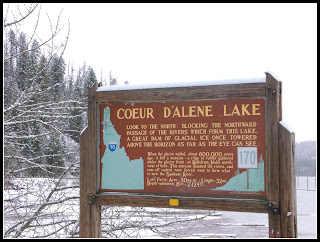 This year Auntie and I packed the truck with breakfast, cocoa, snacks, eagle book, binoculars and camera and off we go.  It is only about 30 miles from my house so I make this trip every year and have done so for many years.  It was a foggy, snowy day, but the roads were clear making it a wonderful day in my book. 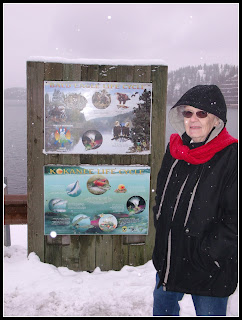 During the month of December the eagles stop along the lake to  partake of the spawning Kokanee salmon.  Wildlife volunteers do a bird count, set up eagle displays and they have sighted over a hundred eagles this year.


Eagles wingspan is up to seven feet wide, so while they are wider than we are tall they only weigh approximately 12 pounds.  Why can't I have hollow bones!! 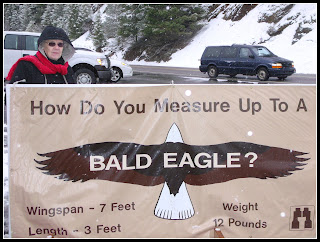 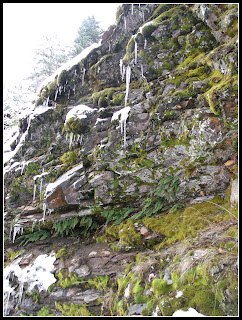 Along the side of the road where I parked I found this interesting  mountain side complete with moss, growing ferns and icicles.  Click on the picture to see more detail.

I haven't mastered action animal or bird photography. I took many, many pictures of blurry eagles swooping down to catch their prey and tips of wings flying out of the picture. Someday I will master birds in flight and the patience to wait for the treasured shots. In the mean time these two eagles were so helpful and sat perfectly still for me. 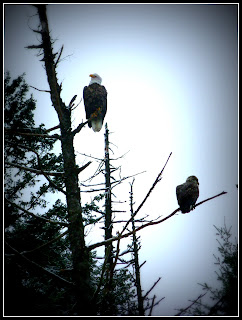 It was a wonderful day!!!

Sorry folks it's all I got!!

Posted by klbexplores at 9:07 AM 7 comments:

Email ThisBlogThis!Share to TwitterShare to FacebookShare to Pinterest
Labels: eagle

Santa has her Ho Ho Ho Back!

Finally, the news I've been waiting for.  The crutches are history.... I'm walking again!  What better Christmas gift could I ask for.  It certainly has been a long eight weeks and my leg is more than a little weak but I'm on the mend and ready to get back to work.  But first a little Christmas fun.

I woke up this morning (December 24) to fluffy white stuff.  I have a hard time getting excited about snow.... except for at Christmas.  It is a beautiful white blanket covering my world. 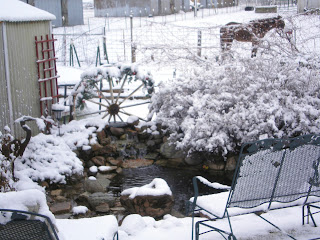 The pond is lovely blanketed it snow.  The water fall runs all year but during really cold snaps needs a heater to keep it from freezing solid and killing the fish.  So far this year it has been very mild so no extra heat is needed.  Still a lovely place to stop and enjoy. 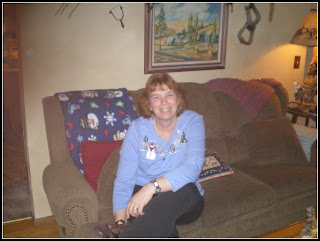 The presents are wrapped, but there is cooking to do....
Have a Merry, Merry Christmas, I'll be thinking of you!

Posted by klbexplores at 8:36 AM 5 comments:

Where will you be? 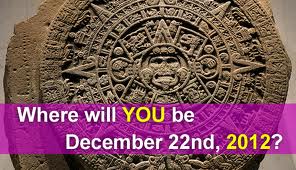 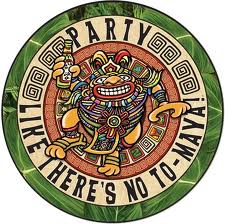 Or laugh at the whole thing? 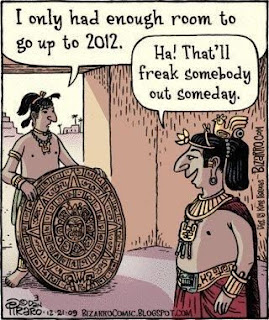 On the bright side if the world survives.... 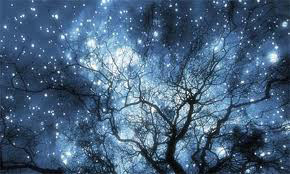 December 21, 2012 is also winter solstice so the days will begin to get longer
and I'll camp again! 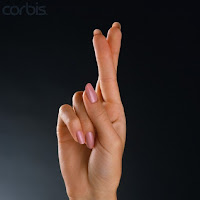 So my fingers are crossed and I'm waiting for news on the latest xray's.  At the very least I want to park the crutches in the garbage.  It has been eight very long weeks and I'm wanting to get this house - selling show on the road.


The last couple of weeks I have been cleaning out closets and doing lots of little chores towards getting the house ready to list with a realtor.  I have set a new target date of January 1, 2013 to get it listed..... ready or not. 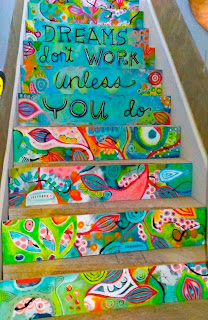 It is not like I can't continue to do little jobs here and there but I am getting the major projects out of the way.  Hopefully the new furnace will be installed this week. (relax - that's not a job I'll be helping with.)  Tonight I am finishing cleaning and waxing the hardwood floors in one of the bedroom.  Then it's making the beds and getting ready for Christmas House Guests.

My spirits are up, Christmas is just around the corner and I'm embracing my new life with gusto!

Posted by klbexplores at 9:02 AM 6 comments:

A Thermal Cooker for Christmas

I admit it I've fallen off the retail consumption train.  For months I haven't purchased anything but food, household products and gasoline.  Then I broke my leg and had oodles of time on my hands and my ole friend Amazon began calling my name.  So I have purchased an early Christmas present for our coming days on the road.

I have been researching thermal cookers for some time and finally decided on the one that I wanted so I purchased it and have been having great fun experimenting with it.  I expect to be boondocking extensively so this cooker will be both a cost saver for fuel and allow safe, unattended cooking while I am communing with nature. 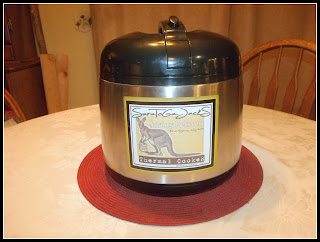 I decided on a Saratoga Jacks Thermal Cooker.  It comes with a heavily insulated base and lid shown to the left and two inner stainless steel pots and a lid that fit in the interior.

I chose this cooker because it had 2 inner pots to allow for and entree and side dish to be cooked at the same time.  I also wanted a medium capacity since storage of leftovers is an issue.  It also was in the mid price range with good reviews on Amazon.


This is how they work. 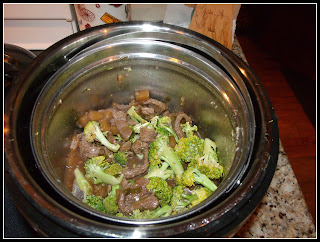 Brown and add ingredients in the largest of the inner pots.
The Pot should be at least 3/4 full.
Bring to a full boil and continue for at least 5 minutes.


If the second pot is being used, ensure that it is ready to put both pots into the inner chamber at the same time. 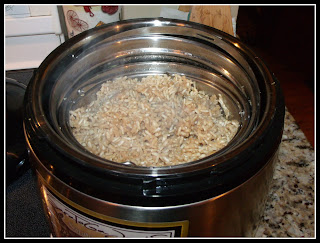 Leave in inner chamber where the heat is retained without further need for electricity or gas for up to eight hours. 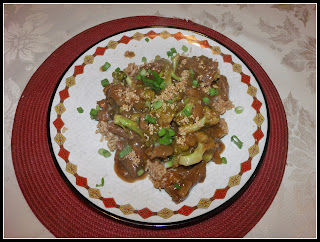 There are some basic differences between Thermal Cookers and Crock Pots.
I have made Chicken Teriyaki, Beef and Broccoli in oyster sauce, Beef Stew and Chicken Noodle Stew.  next on the menu is Chili and cornbread.   Yogurt can be made in the cooker also although I haven't tried making it yet.

Here is a link to a review of the Saratoga Jack thermal cooker
http://www.utahpreppers.com/2011/11/review-saratoga-jacks-thermal-cooker/
And the link where I purchased it
http://www.saratogajacks.com/

It's helping pass the time until my leg is healed and I can get back on track with reading my house for sale.

Posted by klbexplores at 6:43 PM 6 comments:

Well here I am and here I'll be for Christmas this year.  Sometimes I think making plans is the sure fire way for the universe to practice sending curve balls your way.  But swinging at pure air does little to change the outcome so I'm settling in for a long winters nap.

Since standing on my leg is not in the doctors orders, two legged Christmas activities are limited this year.  There has never been a year without decorations so decorate I did.  It certainly is scaled down but there definitely is some Christmas cheer in the house.

Since I am decorating in a scaled down version I decided to only use items that I am keeping.  I will be keeping some of these in storage and one bin will come with me on the road.  (At this point I can't face future holidays without some familiar things.  So this year is a practice year with the limited decorations.)  There are two requirements.  It has to fit in one bin and be light weight.

I have always decorated a seven foot tree as a western tree.  It often took 6 hours or more to get it perfect.  Well for sure, that isn't happening this year, so I decided to transition to a smaller tree.


Several years ago, for Christmas I put together Christmas sleighs for my Mother, Auntie, and daughter who had a house at the time.  Each tree/sleigh had a different theme and was chosen by the interests of the individual.  My mother collected Noah's arks so her tree featured Noah's Ark collectables, my daughter Angels, and my Aunties features Teddy Bears.  When my Mom passed away I kept her sleigh and now it is time to make it fit me.

So I added one of my Santa figurines at the bottom and ornaments from my big tree and presto my tree/sleigh has become my own and still holds sweet holiday memories.


Well, that's it for decorating the house...but the advantage is when Christmas is over the put-away will be just as quick and with a little Christmas luck I will be able to return to getting ready for my new life!

Email ThisBlogThis!Share to TwitterShare to FacebookShare to Pinterest
Newer Posts Older Posts Home
Subscribe to: Posts (Atom)
"Our truest life is when we are in dreams awake." . Henry David Thoreau

klbexplores
I'm a mother and grandmother, with grandchildren on both coasts. I have been raised, my three girls and foster children for 40 years. I lived a long time dream to provide a loving foster home environment for children with animals to care for and love. Our animal brood included 2 horses (A black and white paint mare, and a 'paint that ain't gelding' two miniature donkeys (the girls), a pygmy goat, a hen house full of chickens, 15 turkeys, a dog and 3 cats. ....I am dreaming new dreams. I am currently changing my life completely. I sold my house I have retired and I am looking forward to the next chapter of my life and dreams in my little home on wheels. After a few short months family needs called me back to the area in the northwest that has always been home. I am currently living in a three-generational home and awaiting Spring when my wheels can again start turning.